Jeff Kostos, President and CEO; Dr. Joon Kim, the CTO When the two brand new vessels operated by Maid of the Mist begin plying the waters beneath Niagara Falls on April 2, something important will be missing. The topside of the observation deck—where hundreds of tourists stand several times per day to feel the mist coming from the majestic falls—will no longer have a smokestack.

In the 176 years since the first Maid of the Mist entered service, there has been some form of exhaust roughly in the middle of the best set of seats in the house. Now, there is nothing but a smooth deck and a sleek radio mast; the smokestack, and its emissions, and the noise of the diesel engines, and their vibration underfoot, are all gone. The ladies are now fully electric, through the assistance of an innovative startup in the Kansas City area—Spear Power Systems.

As a CleanTech specialist that designs and manufactures high-performance energy storage solutions for demanding applications, the new ferries are a representation of Spear’s commitment to sustainable practices.

"The unique triangular combination of technology development,internal communication, and clear conveyance of our unique value proposition to stakeholders is the key to our success."

For starters, Spear's batteries hold enough energy to allow the vessels to perform multiple service rounds every day, though they will charge during each loading cycle. "Furthermore, the batteries are radically safe," notes President and CEO, Jeff Kostos. "We've developed a proprietary battery management system (BMS) to protect the battery from electrical abuse that could cause a thermal event. In addition we have developed an industry leading module design with patent pending safety features that can minimize the propagation of thermal events and still allow the highest level of energy per unit of weight at the system level. Indeed, Spear's batteries have an outstanding safety record with zero incidents recorded.

Safety Stems from Roots in Defense

That safety feature—an innate quality of every Spear-crafted solution—did not come along by accident, notes Dr. Joon Kim, the CTO of Spear. "Throughout our history, we have focused a lot of energy on supporting the U.S. warfighter.” Kostos and Kim added two essential elements prior to forming Spear – Mitch Mabrey, who served throughout Spear’s growth as Vice President of both engineering and business development, and Daryll Nottingham, Vice President of Business Operations and Contracts. This core team earned their chops while working on critical projects signed off by the U.S. Department of Defense (DoD). "The DoD has big asks, and those have driven—and funded—big answers," adds Dr. Kim. In fact, many of Spear's core technologies were developed in partnership with the U.S. government or a prime contractor.

Spear began in 2005 as Kokam America, a maker of highly specialized battery packs and the individual cells that make them up. At a time when expertise on lithium cells was confined to countries such as Japan, South Korea, and China, the U.S. Government banked on Kostos and his team to bring the technology home. With blessings from Senator Kit Bond of Missouri and financial support from the DoD, Spear became the first lithium polymer cell manufacturer in the U.S.

Soon enough, Spear leveraged its technologies to supply power to laser weapons and other defense-related applications. Since safety is paramount in defense, Spear harnessed the rare capability to maintain a high-level of safety while also maximizing energy/power density in its specialized storage solutions. "Because our industrial- and defense-related solutions go onto platforms that are constantly on the move, weight and volumetric efficiency are critical. Regardless of the degree of challenges, we have never compromised on safety," adds Kostos.

In 2008, Team Spear morphed from Kokam America to Dow Kokam through a joint venture with Dow Chemical.

This government-backed joint venture was specifically earmarked to electrify the consumer transportation market in the U.S. After securing over $160Mn from the U.S. Department of Energy and the state of Michigan Dow Kokam built a massive plant in Michigan to further its plans to tap into the emerging consumer e-mobility sector.

Because our defense-related solutions go onto platforms that are mobile and on the move, weight and volumetric efficiency are critical.


Spear's foray into electric vehicles (EV) seemed natural, especially due to its proven ability to package clean energy in light and volumetric-efficient spaces. However, instead of the crowded consumer EV space, Spear niche applications within the defense, industrial, and marine e-mobility space.

That was more than a decade ago.

It has been seven years since Spear was established under its new avatar.

Spear made a few strategic decisions along the way that shaped its reinvention. First, despite being a pioneer in the realm of lithium polymer cells, Spear took notice of the global commoditization of the base technology and stopped manufacturing cells. "To be competitive in today's cell manufacturing business, you need to invest billions of dollars and set up massive gigawatt-scale facilities. That business model wasn't for us," admits Kostos.

Secondly, Spear realized the need to spread its wings beyond the challenging but volume-limited milieu of the defense industry. Although it continued to develop energy storage for subsea, high energy laser (HEL), and high power microwave (HPM) applications for the DoD, Spear set its sights on the commercial sector. To its credit, the CleanTech startup gradually segued into segments such as industrial mobility and marine propulsion without losing its foothold in defense. Over the last few years, Spear became razor-focused on "niche applications with very high demands" in terms of operational environments—such as high shock and vibration, high altitude, pressure at subsea, and thermal conditions that are difficult to operate within. Kostos elaborates, "We wanted to focus on e-mobility applications within those environments and invest our effort in developing engineering solutions and intellectual property around solutions that solve those specific problems."

As evidenced by projects such as Maid of the Mist, Spear has succeeded in penetrating the commercial sector. Today, its e-mobility solutions are harnessed in underwater industrial research, critical mining functions, and aviation ground-service activities. Some of the recent use cases range from hybrid vessels for airport tarmacs to fully-electric vehicles for mining applications, industrial marine surface ships to unmanned underwater vehicles (UUVs), as well as other applications on subsea and automated vehicles and robots at customer fulfillment centers. Regardless of the specific application within the world of e-mobility, Spear has exhibited the wherewithal to design and manufacture safe and reliable lithium-ion storage systems across industries.

Versatility to Thrive in Three Verticals

While engaging three major industry verticals—defense, marine, and industrial automotive—is impressive in and of itself, Spear understands the priorities of each sector and delivers its solutions accordingly. For example, to a client in defense, operating a remote drill rig with uninterrupted power supply, augmented by safety and reliability, supersedes cost-related benefits. On the other hand, an industrial surface ship client could prioritize ROI gains, and another customer in the marine sector could intend to replace diesel engines with cleaner technology à la Maid of the Mist.
This precise ability to ascertain a client's big picture goals is an admitted strong suit of Spear's team of engineers, scientists, and technicians—most of whom have stuck together for a better part of two decades. To that end, Spear has recently witnessed a shift in the mindset of clients—especially in the upstart marine sector—with regard to their desired gains from Spear's technology solutions. "Initially, they are meeting emission control requirements at ports. However, sooner or later, they seek ROI gains as and when they realize benefits from moving to fully-electric vehicles," says Kostos, before adding that a similar trend is sweeping the mining industry where land-based systems are increasingly going green.

To serve a vast set of applications, Spear has remained selective from a supplier standpoint, collaborating with only financially-viable and automotive-grade manufacturers. That said, when it comes to integrating its in-house designed, scalable electronics, software, and mechanical systems in order to maximize value for its clients, Spear takes a chemistry-agnostic approach in selecting the most application-appropriate solution. Dr. Kim explains Spear’s thought-process, “Chemistry-agnostic refers to the idea that we are an honest broker and work with all kinds of lithium-ion cells. And so, we engage fairly technically with cell manufacturers on their roadmaps and therefore are quick to adopt new chemistries in our products.” This tactic is vastly different to most of Spear’s competitors, who promote their own chemistry and format during manufacturing/collaborating with cell manufacturers. “Our flexible and client0centric approach also reduces time-to-deployment,” adds Dr. Kim. The end goal being that Spear’s solutions can function in any specified environment to best meet client needs. Dr. Kim breaks down Spear’s typical process in designing and building an energy storage solution: “After purchasing cells form carefully-chose suppliers, we assemble them in highly-designed modules with specialized features such as thermal management and propagation control. Then, we add a BMS of our own invention that protects the battery from abuse.”

The ROI gains and overall business growth notwithstanding, Spear takes pride in the fact that its technologies are sowing the seeds for a greener tomorrow. The Maid of the Mist use case is a good example of Spear replacing an unclean source of energy with a cleaner source that is charged by the hydropower created locally.

Clearly, the road ahead presents exciting opportunities for Spear. Fresh off a B Round of financing, Spear recently ramped up its European operations with a new HQ and several other offices across the continent, not to mention a new office in South America. As part of its roadmap, Spear will invest in a number of automation technologies over the next 24 months. "Technically-differentiating solutions are a mantra we intend to carry on," stresses Kostos.

If the last two decades are an indicator, Spear is a trendsetter. Tracing back to the days when it coursed the unchartered territory of manufacturing lithium-ion cells, to later venturing into the niche segments of the e-mobility sector, Spear has always shown a penchant for innovation. Spear's history also paints the picture of a company that taps into "the next wave" before others realize or discover an industry need—a testament to its foresight and ambition. Despite making inroads into the commercial sector, Spear still banks on its strong relationship with government agencies and plans to stay on the path to serving the aerospace defense market. As a matter of fact, earlier this year, Spear provided an advanced lithium-ion battery system to Raytheon for the first counter-unmanned aerial system (CUAS) delivered to the U.S. Air Force. The system will be deployed overseas as part of a year-long Air Force experiment to train operators and test the system's effectiveness in real-world conditions.

On a closing note, Kostos emphasizes that Spear's corporate culture—embodied by mutual respect, collaboration, and communication—is the glue that keeps the firm together. Despite operating out of six different locations across four different countries, Spear's team of over 80 professionals maintains close contact and remains on the same page at all times. "The unique triangular combination of technology development, internal communication, and clear conveyance of our unique value proposition to stakeholders is the key to our success. We are pleased to create sustainable global infrastructure, while also supporting the warfighter," Kostos concludes.
- Kenneth Thomas
March 27, 2020 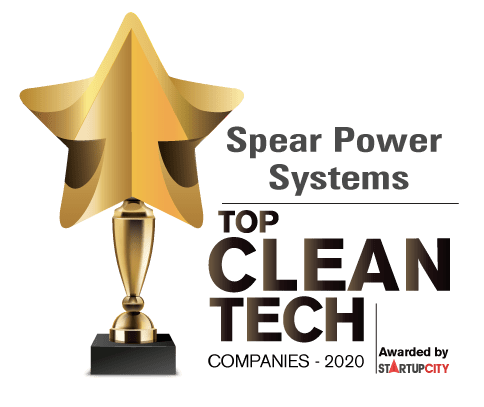 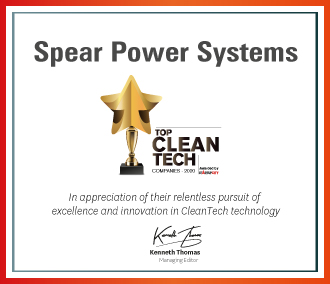