Alexei Gladkov, CEO
The genesis of Kintaro Cells Power traces back to 2011, when Alexei Gladkov, an international business veteran, was diagnosed with severe heart failure. He received stem cell therapy at one of Russia’s best medical research institutions and was completely cured plus general anti-aging effects. Driven by this transformative experience, Gladkov incepted Kintaro Cells Power with a mission to rejuvenate and increase life expectancy and improve the quality of life for people. Adapting stem cell technology from the Medical Radiological Research Centre in Russia, the company was first set up in Singapore and then relocated to current headquarters in Tokyo. “We combine more than 50 years of fundamental research in Russia and Japan’s advanced cell culture technology to deliver high-quality stem cells,” says Alexei Gladkov, CEO of Kintaro Cells Power.

Gladkov observes that the manufacture of stem cell culture technology follows an age-old manual approach. Further, specific cell therapy and clinical trials are required for the treatment of specific diseases, resulting in high prices for stem cell treatment. Unlike pharmaceutical drugs that yield ROI even when sold at a low cost, the lack of mass production makes it difficult for biotech companies and researchers to provide cellular therapy at an affordable rate. Kintaro Cells Power aims to revolutionize the industry through full automation of stem cell culture, ensuring stem cell treatment’s affordability without compromising quality and avoiding human error. Exploiting body’s regenerative mechanism, the company cultures and manufactures KINTARO cells based on bone-marrow-derived mesenchymal stem cells. This ground-breaking stem cell treatment can prevent over 300 diseases, unlike any other cell therapy in the market. Kintaro Cells Power ensures that the stem cells are produced according to international safety standards and has amassed more than 50 certificates and patents, acquiring credibility with medical institutions worldwide.

Toward a New Future of Regenerative Medicine

The bone marrow consists of two types of cells—almost 99.9 percent of blood-forming stem cells named hematopoietic stem cells and extremely rare mesenchymal stem cells, found just one in 100,000 cells. Mesenchymal stem cells are primitive cells in our bodies for cell renewal and replication, reduction of inflammation, cell differentiation, and the facilitation of specialized organ functions. Kintaro Cells Power extracts these stem cells leveraging its advanced biotechnology. The company uses allogenic cells collected from young and healthy donors 18-24 years, instead of autologous cells from the person who needs treatment. Utilizing its patented culture technology, Kintaro Cells Power grows the cells in a unique culture medium approved by the Good Manufacturing Practice of the U.S. Food and Drug Administration (FDA). The live cells are then injected fresh in the recipients within 48 hours after start delivery from the laboratory, making them effective and long-lasting. Quality checks are also conducted periodically on the cellular cultures of KINTARO cells at Tokyo Medical University.

With its rejuvenating and regenerative functions, KINTARO cells allow prolonging the aging of people. Several studies, including joint research with Tokyo medical university (published in “human cells” magazine), show a decrease in quality stem cell production with age. KINTARO cells possess a pathotropic effect that sends a signal to notify when inflammation or damage to cells occurs. These unique properties enable stem cells to renew skin and revitalize tissues and organs, thereby slowing down the aging process and maintain vigor throughout old age. Kintaro stem cell treatment has been tested in over 2500 human application cases worldwide and holds zero cell rejection risk. “We say everyone after forty should use cellular therapy at least once in a year, such that they can fight aging diseases and improve youthfulness. Through our product, we strive to support a new human, smart and full of energy, to do whatever he wants regardless of age,” remarks Gladkov.

The extensive benefits of KINTARO cells facilitate its use in various sectors—whether it’s diabetes or cosmetology. For instance, Kintaro Cells Power has treated several patients with an early stage of cancer. Periodic injection of KINTARO cells can reduce inflammation and prevent the risk of cancer. Besides, Kintaro Cells Power enjoys demand, especially from high-end anti-aging and cosmetic clinics in Asia. Doctors recommend KINTARO cells to cosmetic surgery or anti-aging therapy patients who ask for products that can supplement the surgical effect and enhance the internal cells. This not only provides an additional income for doctors but a competitive edge for clinics in the market.

Unlike conventional stem cell treatment, KINTARO cells are sustainable in the long run having long-lasting effects between two to three years of treatment. The cutting-edge technology used by Kintaro Cells Power facilitates several (20-50 depending on individual factors) treatments from one donor. This renewable source of donors allows the possibility of mass manufacturing, and the company is planning for a semi-mass market in the near future.

Game-changing Innovations Up its Sleeves

With utmost dedication towards innovation, Kintaro Cells Power is taking measures to change the face of the industry. Having partnered with innovators in the market, the company is in the advanced stage of developing robotization and automation. Kintaro Cells Power is currently establishing the protocol for the auto control of robots by AI. Once finished, the company can manufacture not just KINTARO cells but also most of the market’s cell therapy products. Kintaro Cells Power aims to become a leader in the robotization of Japanese regenerative medicine products and cell supernatant liquid.

Over the years, Kintaro Cells Power has seen significant organic growth with patients turning into partners who support the mission and spread the word across, bringing traction. The company has expanded its network in Asia, establishing a strong team of professionals and offices in Singapore, Vietnam, and Malaysia. Further, Kintaro Cells Power has made entrance to the East Europe market through Ukraine and Serbia. The company has just opened its new research facility in Hokkaido city in Japan. Always incorporating tradition into its forward-thinking innovations, the company aims to make the facility a shrine of cells similar to drug shrines found in Japan. Moving ahead, Kintaro Cell Power plans to continue joint research with Tokyo Medical University and started joint research with Ryukyu University (Okinawa) to discover stem cells and its production. Besides, the company strives to educate and raise awareness of regenerative medicine and stem cell technology worldwide.

Kintaro—The Vision and Mission Behind

Kintaro Cells Power derives its name from the Japanese folk hero Kintaro (golden boy) of Mount Ashigara, who possessed superhuman strength and was known to wrestle against bears and help people. Today, Kintaro is a legendary figure in Japanese culture, famous for his ‘strength, energy, and kindness.’ With its unique ability to regenerate and revitalize, KINTARO cells embody the qualities of the legendary hero. Interestingly, the logo of the company consists of Kintaro holding a flag with a rune symbol. Created by Gladkov himself, Kintaro Cells Power’s rune mark represents the unique blend of western science, immense knowledge from Russian research, and Japan’s cutting-edge technology to fulfill the mission of extending the life expectancy of people and opening the future of regenerative medicine. “With investments required for the next industry step, we hope to have investors who can conceive our far-reaching vision and be a part of changing people’s lives a little better than today,” concludes Gladkov. 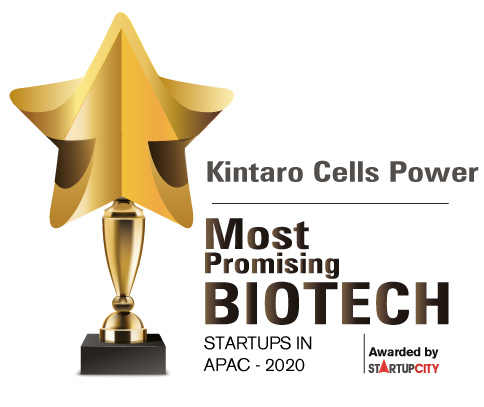 Description
Kintaro Cells Power is a biotechnology company that is a medical supplier of the highest quality of stem cell treatment to revitalize the body and increase overall well-being. Exploiting body’s regenerative mechanism, the company cultures and manufactures KINTARO cells based on bone-marrow-derived mesenchymal stem cells. This ground-breaking stem cell treatment can prevent over 300 diseases, unlike any other cell therapy in the market. The extensive benefits of KINTARO cells facilitate its use in various sectors—whether it’s diabetes or cosmetology. Kintaro stem cell treatment has been tested in over 2500 human application cases worldwide and holds zero cell rejection risk 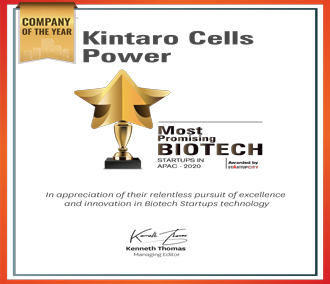