Gyoo-Cheon Kim, Representative and CEO
The application of cold plasma technology is limitless, owing to the flexibility offered in concentration, composition, and delivery of the plasma constituents. Cold plasma technology in the biomedical field has opened up new frontiers in science and technology for several noteworthy medical outcomes such as wound healing, disinfection of surgical surfaces, prostheses, and dental implant insertion, encompassing life science, medical science, and beauty sciences. To this end, Feagle, a global leader in the biomedical industry, produces plasma medical equipment and offers a safely designed plasma device loaded with argon gas; these innovations have shown significant efficacy in remediating health concerns. Feagle is the first company to commercialize and release plasma products without ozone and thermal damage in this market. Nozone Cold Plasma technology is a first-of-its-kind technology, and Feagle owns the patents and technology.

“Feagle is a top-tier plasma medical company with high-efficiency plasma modules and application technologies, trailblazers in commercializing and releasing products in the biomedicine market,” notes Gyoo-Cheon Kim, Representative and CEO of Feagle. Based on this technology and patent, plasma medical devices are being developed and mass-produced with low-temperature atmospheric pressure plasma technology. Over the last four years, Feagle has attracted $13 million in investment through this technology.

As a university professor, Gyoo-Cheon Kim was one of the founding members of the International Society for Plasma Medicine (ISPM) and first introduced plasma medicine to Korea. His longstanding expertise, gained from developing plasma-based applied medicine technologies and conducting substantial research, led to the company’s formation.
According to Feagle’s study, plasma can be used to break through medical limitations such as sterilization, wound healing, inflammation control, and stem cell differentiation.

Feagle produces safely designed plasma equipment loaded with argon gas showing excellent efficacy; argon gas is safe due to its minimal reactivity with other elements and a low probability of generating other compounds. Moreover, high-density plasma can be generated effectively as the gases easily discharge plasma even at a low voltage. Drawing on the merits of this technology, Feagle’s primary focus lies in curing severe diseases such as cancer, carrying out the treatment for dental disorders and tooth whitening, and curing deep wounds and allergies utilizing its patented Nozone Cold Plasma core technology.

In essence, Feagle offers the first hospital-oriented device – Transkin, and a beauty device – Hermodew, that is optimized to repair postoperative skin damage. A beauty-focused device, Hermodew is developed with Feagle’s unique technology that increases the absorption of active ingredients in cosmetics. Additionally, Hermodew helps relieve skin irritation by weakening the binding protein that connects cells to maximize the absorption of the effective ingredients that the skin requires.

To highlight the value proposition of Feagle, Gyoo-Cheon shared an instance wherein a professor and his daughter with severe dermatitis approached Feagle to procure its differentiated technology for the skin healing process. The firm introduced its plasma devices to the professor and allowed him to control allergic reactions within the body. After using Feagle’s plasma equipments, the professor and his daughter experienced relief in a few weeks. Such success stories stem from Feagle’s longstanding experience in the biomedical industry.

Safe to say, Feagle not only mastered the technological problems of plasma, such as controlling the ozone emission but also developed new technologies that further promoted the effectiveness of plasma. Interestingly, Korean culture has grown increasingly popular across the globe as a result of the DC stream of K-culture and K-beauty; Korean aesthetic trends are also gaining traction. With accumulated technologies, through consistent research, Feagle is set to become the global leader in the plasma biomedical industry and create a longstanding trend in Korean aesthetic fields and set its business abroad, especially in the United States.

Description
Feagle is the frontrunner in plasma medicine, taking a giant leap for the brighter future of the Korean and global medical field. 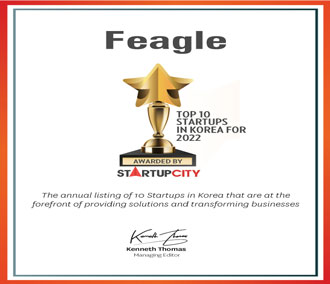